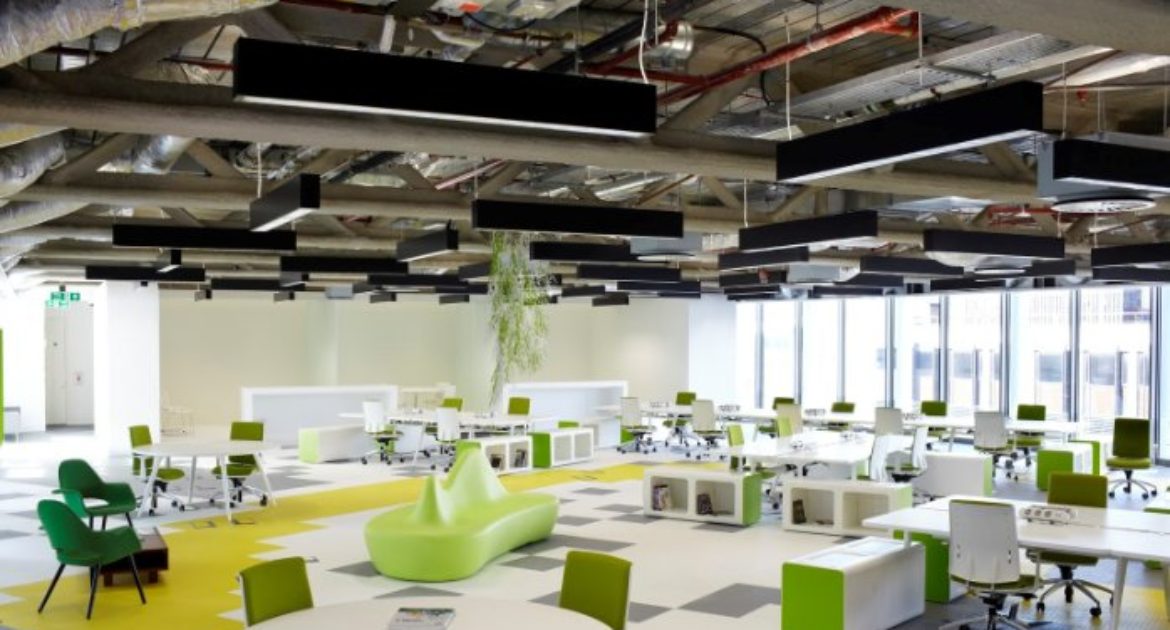 The Power of OOO

Neither has anything to do with office design, of course, but it’s hard not to notice the importance location and environment play in both.

The books made me think the trend to ‘modern’ (read ‘exposed ductwork’) open office designs supports executive and architect’s egos more than real creativity and collaboration.

The Office Design Pendulum Has Swung

Fashionable office designs seem to swing back and forth every few years between environments that prioritize mobility to those that prioritize privacy, from team tables to soundproof cubicles. One day the Wall Street Journal extols collaboration, the next an office furniture manufacturer claims there’s a ‘privacy crisis.’

Based on what I’ve seen, the pendulum has swung all the way to open spaces these days. American Express, Glaxo Smith Kline, Disney, Citrix, PricewaterhouseCoopers, and many other companies have shifted to large groups of employees moved into shared ‘hotel’ spaces.

Jettisoned from their offices, then their cubicles, employees are offered flexible desk space they can reserve a day or two in advance, given a locker with a key, a Wi-Fi password, and a mouse pad with the company logo, then wished the best.

In a show of support, many executives are getting into the act. Mark Zuckerberg, Jack Dorsey, Elon Musk, Tony Hsieh, Michael Bloomberg, Meg Whitman and many others have given up their posh corner offices and have moved to a table on the shop floor, or at least a cubicle nearby.

When I read stories or see videos about executives working in open seating areas, I sense these execs want to be seen as much as they want to keep watch.

Don’t get me wrong, I’m a big fan of this openness and trend toward collaboration and efficiency. There’s plenty of proof workers in the same building with overlapping work spaces or walking paths are significantly more likely to collaborate, and even better, face-to-face conversations increase over email ones.

What I rarely see in these environments, however, is real, disruptive innovation.

I see lots of testing and learning that leads to incremental innovations, but not many breakthroughs.

The breakthrough ideas that birthed these companies, if I can extrapolate from the Richards and Bennis books and my experience, happened not in offices, but years ago in remote, often shabby locations, where a few impassioned folks lived on top of each other, and focused on a single goal, a made-up enemy, and a looming deadline.

But, later, after a successful public offering and a move to more bespoke offices, creativity slowed.

The Conversations That Make Us

I can’t speculate why this happens, but I notice, even with new furniture, the conversations don’t change.

I believe every little thing, person, or butterfly wingflap around us affects in some way.

What affects us most are the conversations we have.

Many office design companies have tried to re-create the startup sequestering by creating a mix of office environments that support different types of team conversations, from walled-in call centers of hard driving closers to rolling whiteboard cubbies for soft-voiced coders.

Unfortunately, as employees step out of their specialized spaces, they are soon back at the cafeteria and in the hallways, in the same slipstream they were before, quick to take advantage of the gossip, but slow to talk about what could be.

Out of Office (OOO)

What I’m wondering is if companies yearning for innovation should consider moving their best teams away–far away–away from the hum and drum of their offices.

Away from the old conversations.

Maybe even to a chateau in the south of France.

Keith Richard’s autobiography is a long (550 page) travelogue of the Rolling Stones moving from one country to another to record the next album (and avoid the next government asset seizure).

In 1971, unable to locate a studio they felt comfortable in, The Rolling Stones installed recording equipment in a truck, rented a castle in Villefranche-sur-Mer called Villa Nellcôte, and recorded the epic double album Exile on Main Street.

The basement in Nellcôte was big enough, but it was divided into a series of bunkers. Not a great deal of ventilation —hence [the song] “Ventilator Blues.” The weirdest thing was trying to find out where you’d left the saxophone player. Bobby Keys and Jim Price moved around to where they could get their sound right—mostly standing with their backs to the wall at the end of a narrow corridor…. Eventually we ended up painting the microphone cable to the horn section yellow. If you wanted to talk to the horns, you followed the yellow cable until you found them. You wouldn’t know where the hell you were. It was an enormous house. Sometimes Charlie would be in a room, and I’d have to tramp a quarter of a mile to find him. But considering that it was basically a dungeon, it was fun to work there.

The result was an 18-song double album that many consider The Stone’s finest, and to some, one of the greatest rock albums of all time (If The Stones are not your cup of tea, there are many other examples of great albums created in unusual environments that are equally groundbreaking).

Location doesn’t only work its magic on music and musicians. In Organizing Genius, Bennis catalogs five “Great Groups’ working in unusual, non-office circumstances that created innovations like the Macintosh, the movie Snow White and the Seven Dwarfs, and the Stealth Fighter, among others. Many more have been created in lesser environments (many in dorm rooms) since the book was published in 1997.

Rarely were those innovations created in sanctioned offices.

Bennis wrote of Kelly Johnson, who leader of the team that created the Stealth Bomber:

Johnson paid no attention to how the quarters looked or how comfortable were. One of the principles he held dearest was they that designers and mechanics should work side by side, making suggestions and addressing problems as they went along, so the prototype could be modified on the spot. In the Skunk Works, desks were crammed together, prompting one engineer to post a sign that read, “Privacy sucks.” No one seemed to mind, perhaps because their concentration on the task counteracted what in less-intense groups can be the hell of other people. Rich remembered his early colleagues as “all young and high-spirited, who thought nothing of working out of a phone booth, if necessary, as long as they were designing and building airplanes.” He writes that he learned to love the “slumlike conditions.”

I wonder if it’s time to think less about building creative open spaces in offices and shifting to separate, less exotic spaces for teams and their leaders to work. Not just renting flexible office spaces (from companies like Regus, Sharedesk, or Liquidspace) but seeking out sparsely appointed homes, garages, or Quonset huts where project teams can live, fart, and yell at each other for months until they create something truly great.

The Leader Sleeps There Too

And, lest executives think once teams have located the perfect hovel, they can retire back to their plush office, Bennis and Richards are very clear: Working separately only works if the leader is there working side by side with the band, keeping the team focused on the goal and keeping the bureaucracy at bay.

A leader of a Great Group, Bennis says,

…must first of all command unusual respect. Such a leader has to be someone a greatly gifted person thinks is worth listening to, since genius almost always has other options. Such a leader must be someone who inspires trust, and deserves it. And though civility is not always the emblematic characteristic of Great Groups, it should be a trait of anyone who hopes to lead one.

Working closely with the team at a remote location gives leaders the chance to instantiate the mission and vision that otherwise lives silently on a wall plaque.

Moving teams offsite won’t always make sense, of course, either for economic, oversight, or, team maturity reasons. Some teams, like manufacturing or website maintenance teams, who don’t focus on a single project but a sequence of steps or constantly changing ones, are probably better served by staying on the shop floor.

The recipe for creating spaces that will promote great talents to create great things has yet to be written. It certainly won’t be written by architectural firms or office furniture manufacturers who would want executives to focus on glass conference rooms, $10,000 couches, nap chairs, and exposed ductwork.

But, based on the innovation described in these two books, I have hope it will be written by leaders who trust their teams enough to push them past the cappuccino machine, out the door, and back into the garage.

Then set up a cot in the corner for themselves.

Are open office designs helping or hindering your team’s ability to be truly creative?