HomeAgile That’s It. That’s the One. 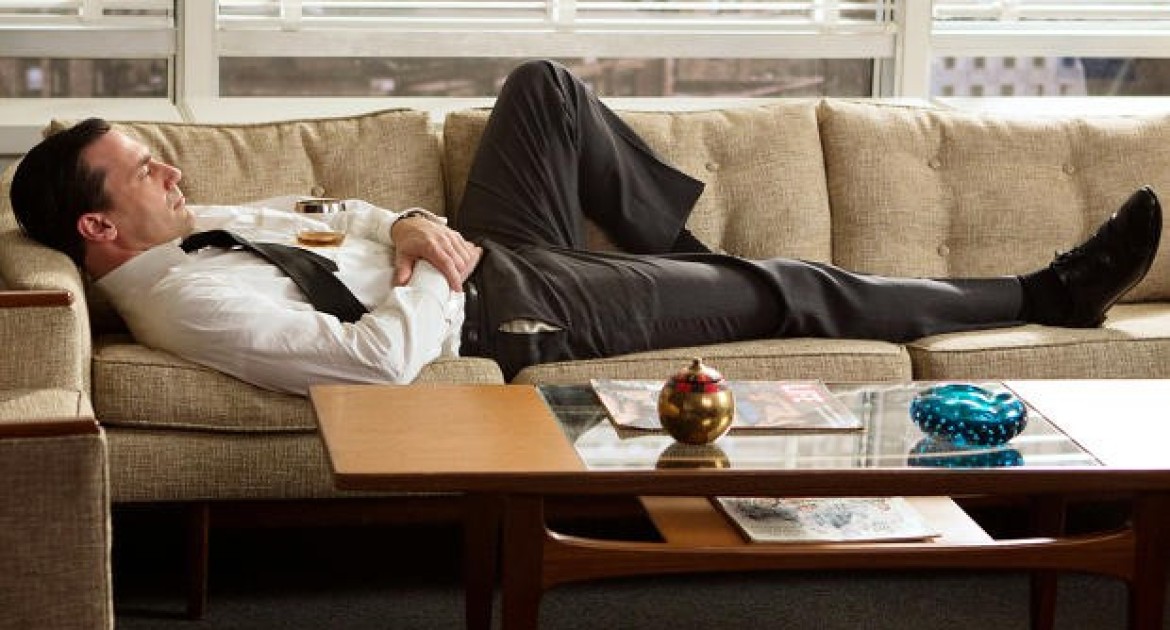 To be honest, I won’t miss Mad Men, the overwrought fashion show with vellum-thin treatments of politics, feminism, and pop culture we’re asked to nod and wink at. Emotionally, I’m not drawn to Don’s downward spiral like I was with Tony Soprano or Walter White, who seemed to struggle on more fertile and less claustrophobic landscapes.

But I know I really watched Mad Men for the process. The creative process.

I watched Mad Men for its hip, jazzy view into the advertising sausage factory: The pedestrian challenge of promoting baked beans when catsup is all the rage, the immersion in baked bean psychology, the zeitgeist of home-cooked meals, then the ideas, ideas, sketches, sketches, sketches, catch phrase after catch phrase over boozy dinner gamesmanship, war-room tables or napkins in a beatnik bar.

The creative process, at least the one pictured in Mad Men, was a long, relentless, and often ruthless search for the one idea that would stop a room cold and breathless. It was Freudian self-analysis for professionals with no time for Freud.

As an Agile software guy, the creative process pictured in Mad Men stings like a wasp. We soldier through sprints, burndowns, backlogs, stories, tasks, and defects, all in anticipation of an emotionless demo on Friday. We’ve relegated the idea generation to the backroom, bringing Sal Romano and his production team to the front room, and three the Creative Director off the roof (Mr. Weiner, if someone has to go over the edge this last season, please let it be Pete).

We’ve minimized creative visionaries, the professionals with experience and taste. In a relentless effort to deliver quality software, we’ve skipped inspiration, talent, and even cunning, letting customers in Nebraska, South Dakota, or Pacoima tell us what’s good. We’re no longer waiting for “That’s it. That’s the One.”.

We’ve minimized creative visionaries, the professionals with experience and taste.

“Look at Google,” I’ve heard. “They released before it was beautiful and everyone loved it. So ship it.”

This has all happened before in other media in the past, of course: Bauhaus, EDM, Jeff Koons. Years later, we still want some of that technology in our lives. But most of it, not so much.

I know Mad Men is just a TV show. It’s an idealized, time-compressed version of the creative process. But it’s as close to the truth as television can be, I think. I’ve worked with some of the best Creative Directors in the business and Mad Men’s way of getting to the “That’s It. That’s the One” is pretty close to what I’ve seen: The best creative people absorb the problem, the customer, pop culture, and whatever comes their way, then they and their teams spew ideas until the night before it’s due.

And nothing goes out until the Creative Director is moved.

Great Creative Directors have the ability to sense the ignored emotional need. They revel in details and notice the flaws that are invisible to most. They create beauty by pointing out something we’ve not noticed before. And, in front of the guy with the checkbook, a good Creative Director can spin it into a yarn in a funny and charming way. They can sell concepts that blow past bigotries. They are bold and not easily dissuaded by last week’s multivariate test. They are sensitive, yet willing to stand out and lead.

And, they are almost always touchy.

Unfortunately, Scrum doesn’t really cotton to that type. In our rush to get software out the door on a daily basis, we minimize opinionated egomaniacs and go for folks who make it function.

Technology itself facilitates this need for speed. Because of its malleability we can always release it and fix it later. Everything’s always and forever in Beta, capricious and evanescent.

A magazine ad, on the other hand, is out and gone forever, unfixable, even if a model’s nipple slipped. In technology, you don’t really need a sharp eye, because some guy on Reddit will quickly bring it to your attention.

So, how do we fix this situation?

Here’s a few recommendations that I admit are not new. They’re almost nostalgic (not 1960s Mad Men nostalgic, but Model T nostalgic). Graham Wallas’ The Art of Thought (1926) described a 4-step creative process that I think still holds today:

There is power in creativity, in the small connections we’ve previously ignored. Despite the work of the saints who disprove my point (Jobs, Ive, Starck, Fadell, et al.), I believe we’ve mostly lost creative sensitivity in software development because we’re moving so damned fast.

I’d like to think Mad Men has given us a tiny glimpse into what really works: The idea, the effort, the ennui, then the hope. I think the software process pendulum has swung far enough toward efficiency and needs to swing back, lie down, and relax a little.